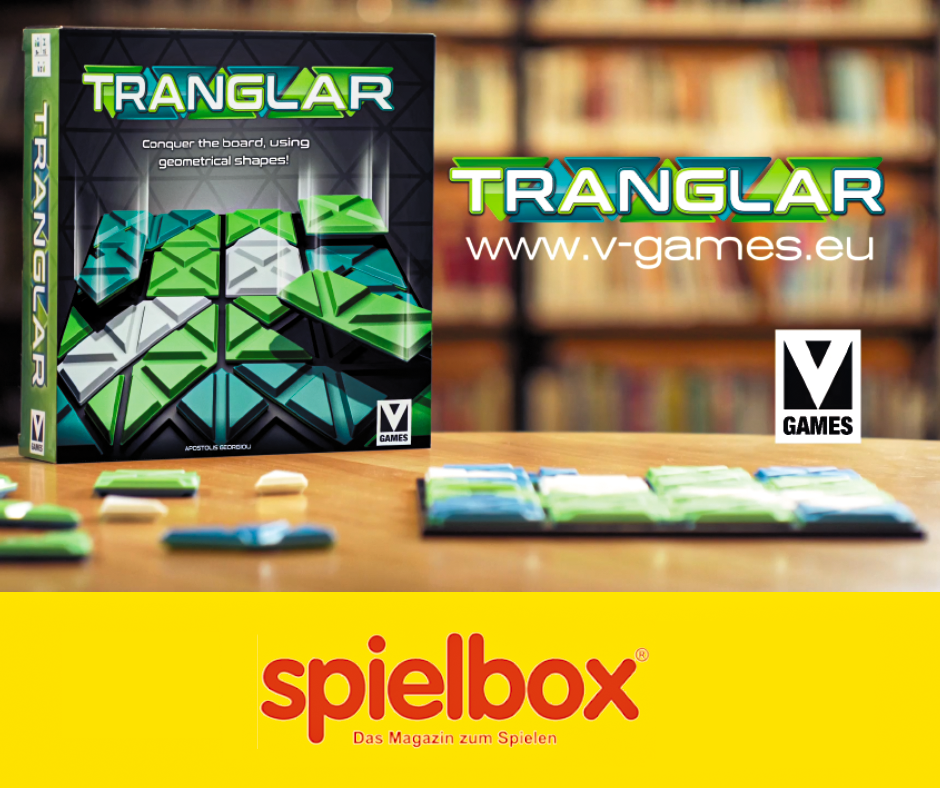 Today we are pleased to announce and share that TRANGLAR was reviewed and rated with a “clean” 8 out of 10 from 2 reviewers in Spielbox, which is probably the most specialized and trusted game magazine in Europe and overseas. The review compares TRANGLAR with world classic best sellers and actually distinguishes and names it as a completely innovative and special item. The 8/10 is not a rating the German Spielbox credits easily and in the last edition there is only one best seller game which has a similar rating. We expect more distinctions for TRANGLAR soon while we are launching it in several premium markets during Fall 2022.

The premise of flipping an opponent’s tiles through pincer maneuvers, is central to the almost 140 years old REVERSI, which with small changes has also been marketed as OTHELLO since the 1970s. Instead of  a pincer, in Claude Duvernay’s game BOOMERANG, released in 1982, the mere contact of one side is enough during placement, to flip any of the opponent’s tiles.

Through Tranglar, this technique has been further refined, enhanced with a novel element. In the game by Apostolis Georgiou the takeover of an opponent’s tiles is achieved through adjacency to a majority of its sides by your own tiles. With tiles of up to five sides, this majority may even require up to three adjacent tiles. Placing a tile where it would immediately be flipped is not allowed.

The novel element is the ability to replace an opponent’s tile through multiple smaller tiles, and adding the spoils to your reserves. This way even formations with otherwise protected sides can be burst wide open, possibly triggering a chain reaction. It is possible for the tiles used for the takeover to be placed in a position that under normal circumstances would be prohibited; they may though end up getting themselves flipped at the end of the placement.
While at first both parties look to safely place those of their tiles composed of multiple triangles, through mutual thefts more and more tiles are placed on the board, which are only composed of one or two triangles. Key to victory is now to reclaim one’s own tiles by swapping them out for larger tiles, something that is also permitted. This action, due to the cumbersome shape of larger tiles, may need to be well planned.
A variable start is facilitated through the placement of two neutral tiles. Use of the small neutral triangles as shields is only available once all of one’s own small triangles have been used up. Even if the battle for the largest area is a familiar objective: yet refreshing is to use to this purpose two fundamentally different but well paired mechanics. 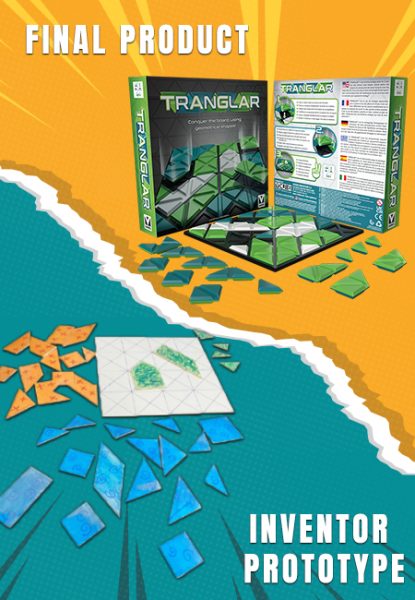 TRANGLAR has been invented and designed by Apostolis Georgiou, an inspired amateur game designer.
We licensed it just in mid of January 2021 when he handed us the paper prototype of the game. We didn’t change anything on the game’s plot and rules but we redesigned it completely so it would be easy and handy to play. We created several prototypes on our 3D printer and then 5 molds have been created for the injection molding of its new plastic pieces. At the same time we designed the logo, the packaging and the rulebook with Christian Fiore. The first production of the game took place just in June 2021, having it ready for Essen Spiel.
It is the first time that basic geometrical shapes, which consist of isosceles triangles, are being used as “weapons” – actually each one of them with different properties – in a strategy game where players are making a “peaceful” war of triangles – this is why the name Trangl-ar – in order to Conquer the Board.

This website uses cookies to improve your experience while you navigate through the website. Out of these cookies, the cookies that are categorized as necessary are stored on your browser as they are essential for the working of basic functionalities of the website. We also use third-party cookies that help us analyze and understand how you use this website. These cookies will be stored in your browser only with your consent. You also have the option to opt-out of these cookies. But opting out of some of these cookies may have an effect on your browsing experience.
Necessary Always Enabled
Necessary cookies are absolutely essential for the website to function properly. This category only includes cookies that ensures basic functionalities and security features of the website. These cookies do not store any personal information.
Non-necessary
Any cookies that may not be particularly necessary for the website to function and is used specifically to collect user personal data via analytics, ads, other embedded contents are termed as non-necessary cookies. It is mandatory to procure user consent prior to running these cookies on your website.
SAVE & ACCEPT